Arabia surprises us this summer with four beautiful mugs illustrated with scenes from the new Moominvalley 3D animation series. The series from Gutsy Animation gives new life to Tove Jansson’s stories bringing them closer to younger generations through a mix of 2D/3D techniques where the characters appear in 3D with 2D illustration for the background.

Each mug is linked to a different story and a different season: spring with the Last Dragon, summer with the Golden Tail, fall with the Night of the Groke and winter with Midwinter. The four mugs come with a special stamp on the bottom showing the Moominvalley animation logo and they are dishwasher, microwave and oven safe up to 200°C.

Spring has arrived in Moominvalley and Snufkin has just returned from his trips. Moomintroll has been eagerly awaiting the return of his friend because he has big news to tell him. He has just found a beautiful golden-dragon, and he wants to show his new pet to his friend.

The entire Moomin family has to leave the house which is overwhelmed by the flood in Moominvalley. The summer theater floating in the river becomes a new home for the family.


Moominpappa is excited to create a play of adventures from his youth. The excitement of the play causes the Moomintroll’s tail to go bald. But Moominmamma has an unexpected solution: Moomintroll will get a golden tail!

In Night of the Groke, Moomintroll is left alone when Mamma and Pappa are going on an impromptu adventure. He has to overcome his anxiety by confronting the cold shadowy creature, the Groke. The Groke is a ghost like creature which freezes everything she touches and leaves a trail of ice and snow in her walk.

She seeks warmth and friendship but is feared by all and left alone in her cold cavern on top of the Lonely Mountain.

In Midwinter Moomintroll wakes up too early from his hibernation to find Moominvalley covered in snow.

Walking alone in the winter silence, Moomintroll has to resort to the wisdom of his ancestors to survive the winter mystery.

Tove Jansson, Astrid Lindgren and Elsa Beskow are three of the most prolific Scandinavian authors of children’s books which enchanted the childhood of many generations. They are celebrated around the world not only through their books but also in everyday life through beautifully designed home items. With spring we bring you a rich new collection from Muurla featuring the Moomin family, Pippi Longstocking, Emil and Ida, the Blueberry and Lingonberry people, as well as the Nordic series illustrating the nature and animals of the North.

Finnish clothing brand Makia has created a new Moomin inspired product line. In addition to clothes and accessories, they collaborated with Muurla to create several enamel mugs and candles. In autumn we had the Moominpappa and the Sea series, and now we have three new pastel color models based on the Adventures of Moominpappa book.

Visit our shop to find these and many other beauties finlandquality.com 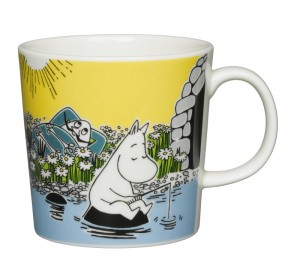 The new Summer 2015 Moomin Mug from Arabia features pictures from the Moomin falls in love in the comic album #3. This mug is the last piece of a story which started in 2012 with Primadonna’s Horse, followed by Snorkmaiden and the Poet and Sailing with Niblings and Too-Ticky.

After months of heavy rain in Moomin Valley, Moomins try to save an entire circus from the flood. Moomintroll soon falls head over heels in love with the circus Primadonna.

Later Moomintroll sets up camp on shore with the circus strongman, Emeraldo, where they bath in the sun fishing, away from the ladies which have grown jealous. During the night Hattifatteners attack the ladies but the Primadonna’s horse alerts the men and Moomintroll rescues the true love of his life, Snorkmaiden.

The whole adventure comes to a happy ending with Moomins returning to their house on stilts.

Unlike most Arabia current products, this mug is made in Finland.  The mug and the matching bowl are available in our store