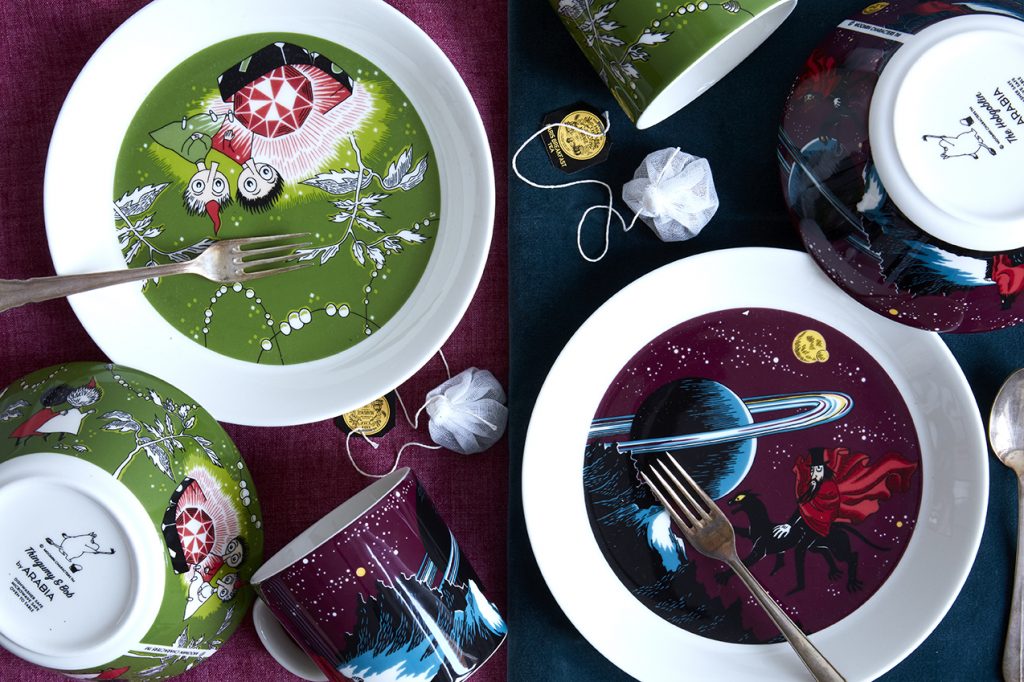 We are so excited about the new Moomin sets from Arabia: Hobgoblin, and Thingumy and Bob and the King’s Ruby!

Thingumy and Bob and the King’s Ruby come to replace the old Thingumy and Bob set which was discontinued last year, and the Hobgoblin is a totally new character in the Moomin Arabia family. 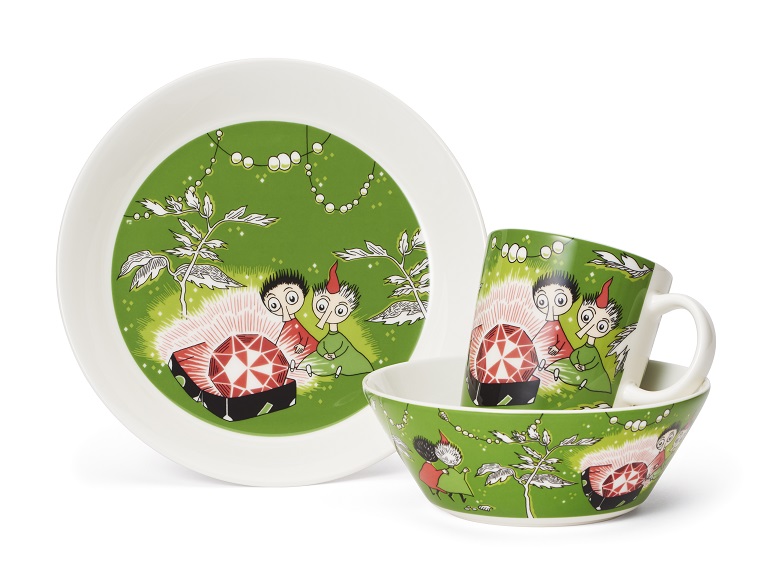 These two new designs are based on images from Tove Jansson’s book Finn Family Moomintroll. The original drawings were black and white and now Tove Slotte breathes new life into them, enriching them with deep purple, red and fresh crispy green. 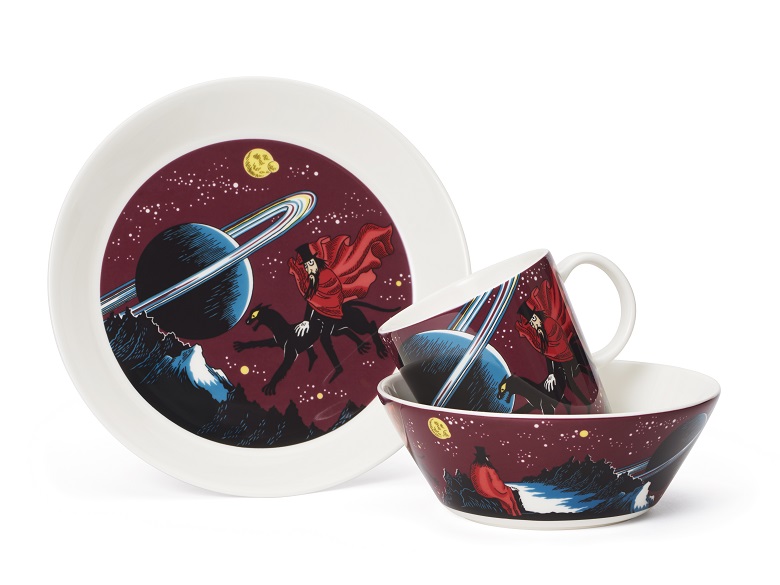 Last summer we were presented with the special Moominvalley Mug which was illustrated with the cover of the same book, and these two new designs follow the story line from the book.

When Moomintroll, Sniff and Snufkin find the Hobgoblin’s hat, all kinds of unexpected adventures and mishaps begin in Moominvalley.  Eggshells thrown into the hat turn into clouds on which the children fly over the valley, and when Moomintroll hides into the hat during the hide-and-seek game he is transformed beyond recognition.

The Moomins exchange later the hat for the King’s ruby which Thingumy and Bob have stolen from the Groke. This large ruby is exactly the one that the Hobgoblin is looking for, when he arrives to Moominvalley riding his panther, but he is refused.

In the end the Hobgoblin grants wishes to everyone at the party offered by the Moomins, and thus Thingumy and Bob wish for a ruby duplicate which they offer to the Hobgoblin, who can grant wishes of others but not his own.

The new Moomin character dishes come to our shop in week 8 of 2018.

Subscribe to our newsletter to get the notification of the new products arriving in our shop, 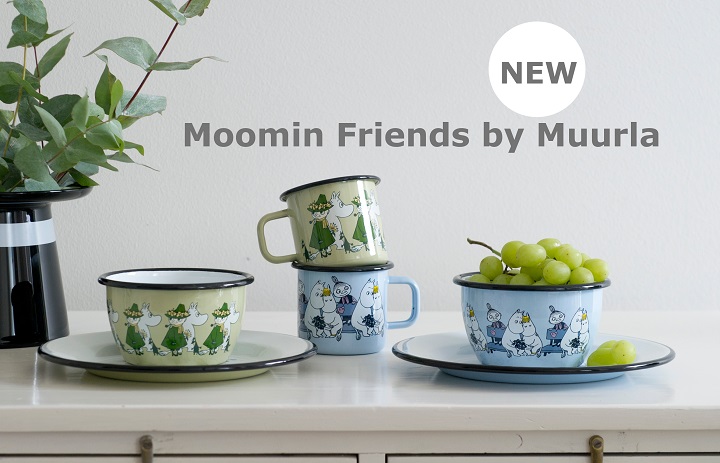 The new Moomin Friends Collection of mugs, plates and bowls form Muurla is now in our shop. Next to the pastel colored mugs launched last spring we have added bowls and plates. The enamel dishes are versatile and durable, perfect for everyday use.

This year’s winter series from Arabia is called Moomin Spring Winter. They are designed by Tove Slotte based on pictures from Tove Jansson’s book, Moominland Midwinter (1957). Tove Slotte has been working with Arabia for more then 30 years, designing almost all of their Moomin products. She gives new life to these beloved images, bringing them into the 21st century with a fresh crisp look.

As the name of the series suggests, they bring promise of spring while winter is not over. As we know Moomins sleep through the winter, but now Moomintroll has awakened from his winter sleep and goes out to see snow for the very first time. Little My is also getting acquainted with the snow. She discovered that Moominmamma’s silver tray is perfect for sliding down the hill.

As the sun starts to shine a little more and the snow is melting, Snufkin returns to Moominland from his long wandering journey. He knows that Moomintroll has been waiting for him longingly.

After the winter solstice the day light starts growing little by little, and by March spring is in the air, but the Moomin friends can still enjoy the winter games and adventures.

This lovely new Moomin series contains a mug, a bowl, 2 coffee spoons, and a set of 4 mini-mugs for the Christmas tree or home decoration.

Finland Quality Design to order your favorite pieces and don’t forget about our Moomin Advent Calendar. 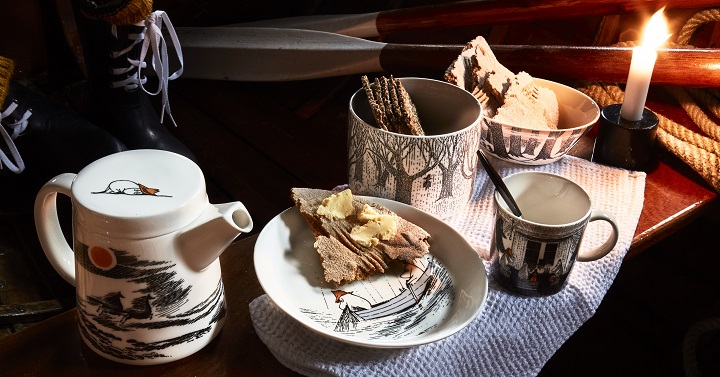 If you’ve heard of the Danish concept “hygge” (the art of well-being and making life cozy and enjoyable) this is how we would picture it on a long dark winter afternoon: tea with honey, biscuits, candle light, wood and beautiful Moomin dishes. The new set from Arabia, “True to its origins” has arrived in our shop.

This beautiful set, consisting of a mug, a bowl, a plate, a biscuits jar and a pot, is illustrated with pictures from “Moominpappa at Sea”, as well as the last Moomin book written by Tove Jansson, “Moominvalley in November”. Tove wrote her last Moomin story shortly after her mother past away, and both this books have a more somber, melancholic tone then her previous work.

“Moominvalley in November” story is set in the last days of autumn when many characters decide to travel to Moominvalley, only to discover that the Moomins have left their house. They settle down in the house waiting for the return of Moomintroll and the other Moomins.

All these and more are available in our shop now. You can see the whole series here.

Here is a beautiful new Moomin collection from Finlayson to warm our long dark winter nights. Finlayson has prepared a whole series featuring Moomintroll finding the Ancestor hanging from the crystal chandelier: a satin bed set and extra pilowcase, a hand towel and a large bath towel.

Also part of the collection is Moomin Magic series in red and black containing bed sets and many beautiful, useful things for the kitchen : aprons, pot holders, table mats as well as decorative pillows and shopping bags.

All these and more are available in our shop now. You can see the whole collection here.

In just a few weeks, in the middle of May, Arabia will launch a new exquisite Moomin mug, result of their collaboration with Tampere Art Museum. The mug is illustrated with one Tove Jansson’s aquarelle which was painted for the cover of the french version of the book “Finn Family Moomintroll” in 1968.

In the story Moomintroll , Sniff and Snufkin find the hat of the Hobgoblin, that magically changes things. Eggshells turn into clouds and the Moomins begin to fly on them.  The Hobgoblin is looking for the world’s biggest jewel and he wants to get Thingummy and Bob’s ruby. All is well in the end and Moominmamma throws a party where everyone is invited to celebrate.

Arabia has worked with the City of Tampere and Tampere Art Museum to choose a representative piece from their collection to create this beautiful mug as a tribute to Finland’s centenary, with the theme “Together”.

Subscribe to our newsletter to get the notification of the mug arriving in our shop, 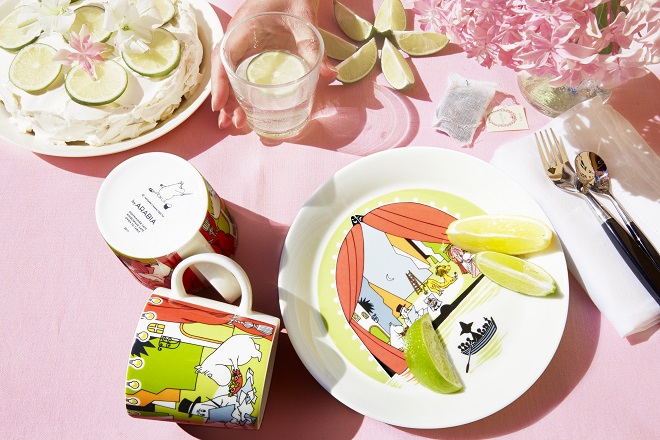 This summer’s seasonal products from Arabia feature the Moomins and the summer theater.

One summer night a nearby volcano erupts and creates a massive wave that floods Moomin Valley. While escaping the flood the Moomin family and their friends find a building floating past, and take up residence there. The house looks strange, missing a wall, has red velvet curtains and all kinds of strange clothes and wigs and stairs that go nowhere. They believe it is a deserted house until they find out someone else lives there, Emma, who explains that it is not a house but a theater.  Emma, the theater rat,  tells the secrets of the theater world to the Moomins. Moominpappa gets so excited that he even writes a play in which everyone gets to act.

Tove Jansson’s book insightfully describes the human challenges and opportunities. The theater is a stage where everyone can be someone else. “The theater is the most important thing in the world, because it shows you whom you could be, and who you would like to be even if don’t dare be.” Jansson says. 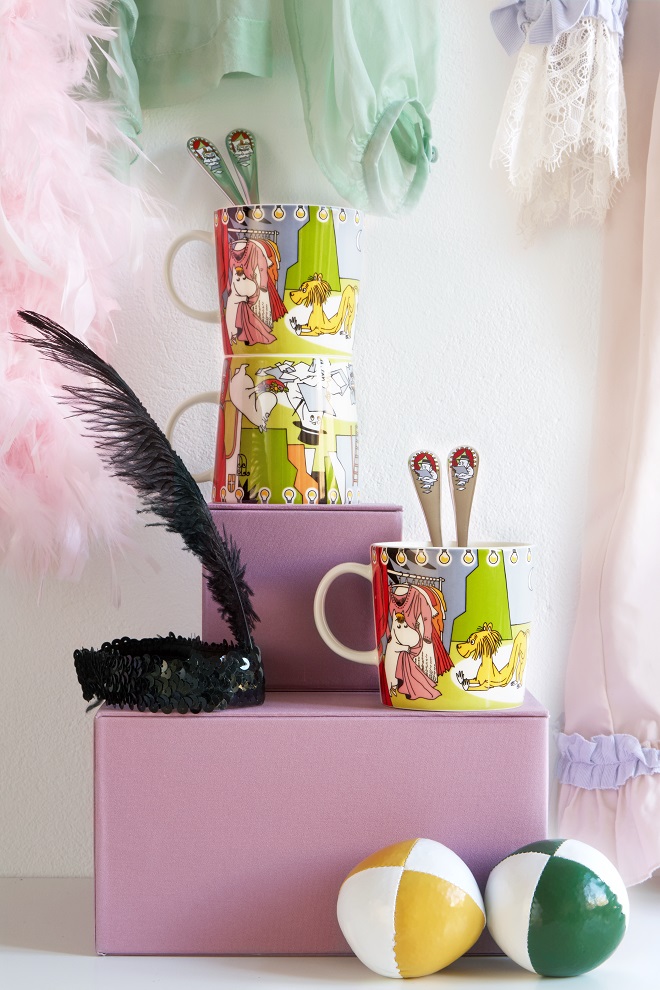 As last summer we will have a mug, a plate and two coffee spoons. Additionally there will be two small ceramics figures, Moomin Troll and Snorkmaiden.

Subscribe to our newsletter to get the notification of the series arriving in our shop,

We are very happy to introduce the new Moomin products from Martinex, Moomin Circus and Trip tin boxes.

This year Arabia gives us two new sets of dishes for kids: Moomintroll and Little My. The plates are 18 cm diameter and one of them features Moomintroll exploring through Moominpappa’s old chest of treasures, tools and souvenirs, while the other one is decorated with animals from the zoo and Little My blowing soap bubbles. The mug, the same in both sets, is 0.18 L in volume, and it matches both plates, showing Moomintroll and Little My hiding the wild animals in the attic.

The images are inspired by Tove Jansson’s comic strip Moominvalley turns jungle. During a drought, Moominmamma plants some tropical seeds found on the shore and a lush rainforest erupts in Moominvalley. The forest is soon populated by wild animals from the zoo set free by Stinky. The police come to take the wild animals back to the zoo and the Moomins hide them in the house. Moomins have to prove that they are not related to hippopotamuses when the police try to capture them too.

These delightful new dishes are now available in our shop

The new Moomin Advent Calendar with toys from Martinex is ready. This year you can find inside the well known and beloved characters like Moomin family, Little My, Too-Ticky, Mrs Fillyjonk, Snufkin, Groke, Stinky, the police chief, and Mymble, as well as new ones from Moomin winter stories like Mr. Brisk and Sorry-oo. The 24th item is the swim house from Moominland. As you can see in the picture they are all ready for a little fun and adventure on the frozen sea.